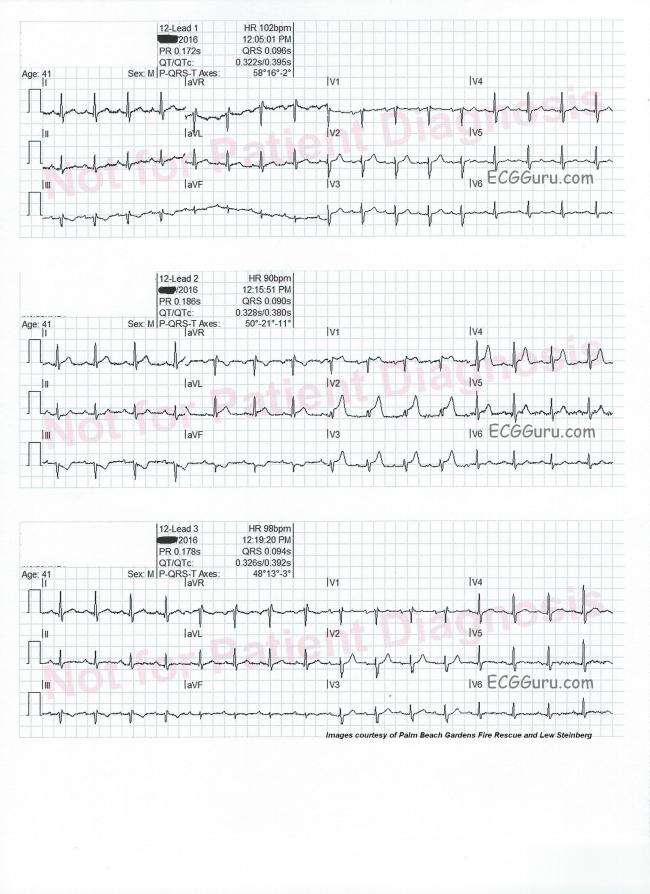 Intermittent chest pain.     This series of three ECG were taken from a 41-year-old man with a two-week history of intermittent chest pain.  At the time of the first ECG, 12:05 pm, he was pain-free.  We see a sinus tachycardia at 102 bpm, and has just come under the care of paramedics. There is a very subtle ST sagging and T wave inversion in Lead III, and no other ST changes. He had an uneventful trip to the hospital.

On arrival at the Emergency Department, just before he was unloaded from the ambulance (12:15), he experienced chest pain.  An ECG was obtained, which shows ST elevation in V1 through V4, as well as in Leads I and avL.  There are reciprocal ST depressions in Leads III and aVF.

The patient was taken into the ED, where his symptoms abated, and a third ECG was obtained (12:19). The third ECG looks very much like the first one. V5 and V6 have T waves that appear flat, or even inverted, but there is some baseline artifact making it hard to see them.

Repeat ECGs whenever possible       This series of ECGs offers a compelling argument for performing repeat ECGs.  This can be especially important when symptoms are waxing and waning.  Sometimes, a clot can completely occlude an artery, then “float” to another position, allowing blood flow to resume.  Sometimes, the artery constricts around the lesion, causing occlusion, then relaxes.  Had the rescue crew not repeated the ECG at 12:19, there may have been a delay in this young patient receiving interventional care.

This is the first of six ECGs donated to the ECG Guru by our friend, Jenda Enis Štros.

The patient is a man in his 60's with chest pain.  This is a pre-hospital ECG showing ST elevation across the anterior wall, beginning in V2.  Though the upwardly-concave shape "smile" appears rather benign, the amount of j-point elevation in these five related leads - in a man with chest pain - does not favor a diagnosis of early repolarization. The diagnosis is STEMI, and the cath lab is activated.

Links to the entire series of six ECGs:

This series of ECGs was taken during ambulance transport of a 67 year old man with chest pain.  Earlier the same week, this man had been discharged from the hospital after having a cardiac cath, angioplasty, and stents. He was discharged the next day.  The patient stated that, until that hospital admission, he was healthy, athletic, and had no significant medical history.  He is currently taking a statin, atenolol, and "one of the new blood thinners" - he didn't know the name.

ECG No. 3 is the first one shown here, taken at almost 39 minutes after midnight.  The patient was complaining of chest pain of 8 on a 1-10 scale.  His skin was pale, cool, and clammy.  The ECG shows acute inferior-posterior M.I., with ST elevation in II, III, and aVF and reciprocal ST depression in V2, and V3.  V1 would normally be depressed in posterior extension of an inferior wall M.I. - unless the right ventricle is also infarcted.  The message from the right ventricle to V1 would be "elevate", countering the message from the posterior wall, "depress".   The rhythm is sinus with ventricular bigeminy.  The rescue crew notified the hospital of a "STEMI Alert". The patient received I.V., O2,  nitroglycerin spray and paste, as well as aspirin.  The patient's BP was 144/92.

ECG No. 4 was taken at 12:41 a.m.  It shows a change in P waves probably reflecting a low atrial focus.  The patient has a slow underlying rhythm with ventricular bigeminy that is probably multifocal.  It is very hard to determine multifocal PVCs when there is no concurrent rhythm strip, but this is a three-channel ECG machine, and the rhythm strips are run separately from the 12-lead.  There are runs of V Tach toward the end of the ECG, and this is not a good sign in a patient with ST elevation.  In some cases, the V Tach can become persistent, in others it is transient.  The ST elevation and reciprocal depressions are still evident.

ECG No. 5, taken at 12:49 a.m., shows further development of the ST segments, and the classic "domed" shape of STEMI.  In addition, a pathological Q wave has appeared in Lead III, possibly indicating permanent damage from this M.I.  In this ECG, the paramedics have moved the V4 wire to the V4 Right position to better view the right ventricle.  V4 Right is slightly elevated, and definitely dome-shaped, like a frown.  This is an indication that the RV is injured, and medications that lower BP (especially nitroglycerin) should be avoided in the pre-hospital setting because of the danger of loss of preload of the RV and sudden drop in cardiac output. The patient's BP at this time was 138/85. 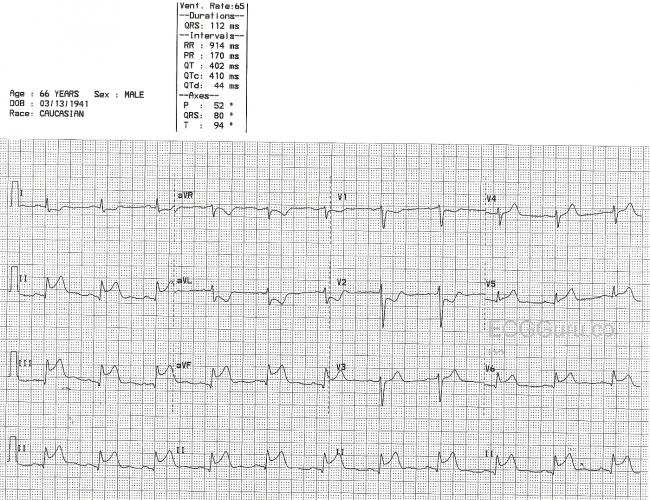 This 66-year-old man presented with a complaint of chest pain.  His ECG shows a "classic" inferior wall ST-elevation M.I. (STEMI).  The ST elevation is apparent in Leads II, III, and aVF, which are the leads that reflect the inferior wall of the left ventricle.  In addition, this ECG shows ST elevation in Leads V5 and V6, the low lateral wall.  The ST depression in V1 and V2 are reciprocal changes caused by acute injury in the posterior wall. In the majority, the RCA supplies the inferior-posterior wall, the right ventricle, the right atrium (including the SA node and the AV node), and in some, the low lateral wall.  The proximal location of this man's occlusive lesion has caused damage in all these areas.  The relatively slow rate is common in IWMI and can be caused by SA node injury, vagal stimulation, or medications.  Clinical data is not available for this patient.