The Patient   This ECG was recorded from an 86-year-old man who was weak, pale, and diaphoretic. He was hypotensive, with a BP of 88/54.  He denied chest pain or shortness of breath.

The ECG   The 12-lead ECG shows a bradycardia at about 60 beats per minute and regular.  The QRS complexes are narrow, at a little less than .08 seconds (800 ms).  The P waves are negative in Leads II, III, and aVF and positive in aVR.  This is an indication that the P waves are traveling in a “retrograde” fashion – backward. The origin of the P waves has to be the AV junction or the lower atria for this to happen.  The PR interval is on the short side of normal at about .12 seconds (120 ms), possibly even less.  This is common in junctional rhythm, as the impulse starts at the AV junction, and travels back through the atria and forward through the ventricles at the same time.

There are no premature beats, and the ST segments are not elevated or depressed. There are no T wave inversions, except for aVR, where it is normal.

Patient Outcome    This patient was diagnosed with orthostatic hypotension, bronchitis, and urinary tract infection. He was treated in the hospital and cleared by a cardiologist for discharge two days later.

Our thanks to Michael Francis and Chris Burden for donating this ECG.

This Lead II rhythm strip shows a regular rhythm with narrow QRS complexes and retrograde P waves.  The strip was taken from a nine-year-old girl.  The rate is about 110 per minute and the PR interval is .12 seconds (120 ms).

When retrograde conduction is seen in the atria, it is often assumed that the rhythm is originating in the junction.  When a junctional pacemaker is initiating the rhythm, the atria and ventricles are depolarized almost simultaneously.  This can produce a P wave in front of the QRS with a short PR interval, during the QRS, or after the QRS.  Sometimes, in junctional rhythm, a block prevents the impulse from entering the atria, producing NO P wave.  Junctional rhythms are usually slow "escape" rhythms, but can be accelerated or tachycardic.

The fact that this rate is 110 / minute and the PR interval is normal at .12 seconds, we should consider that this rhythm could also be from an ectopic pacemaker low in the atria.  From this low starting point, the impulse will travel backward, in a "retrograde" fashion, through the atria, producing a negatively-deflected P wave in Lead II.

We do not have clinical data on this patient, and so do not know what possible causes of arrhythmia might be present, and what the expected rate should be in this situation. 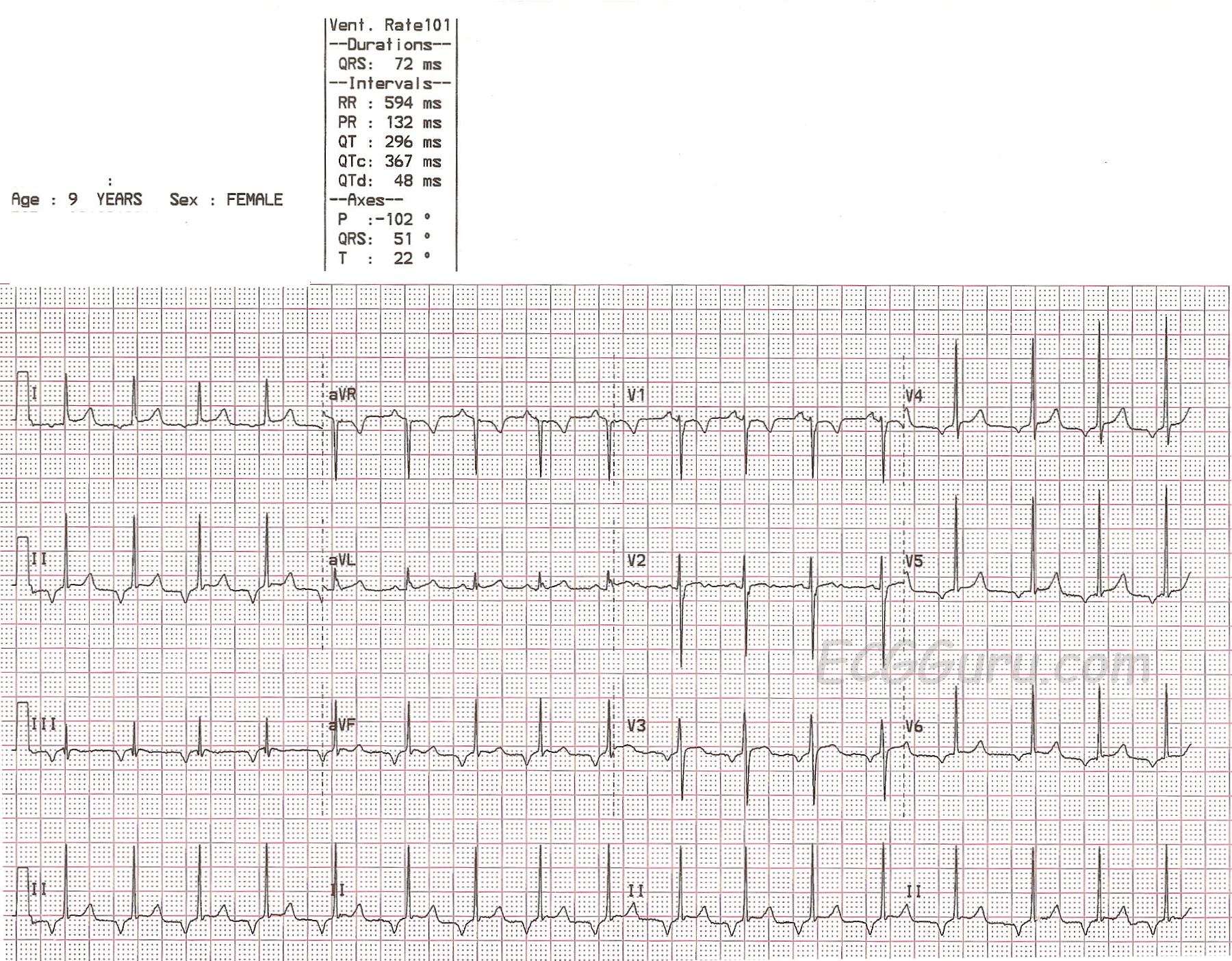 This ECG, taken from a nine-year-old girl, shows a regular rhythm with a narrow QRS and an unusual P wave axis. Unfortunately, we do not have any clinical information.

Normally, P waves are positive in Leads I, II, and aVF and negative in aVR.  They can be biphasic in V1, but are usually positive in the rest of the precordial leads. . The P waves in this ECG are NEGATIVE in Leads I,II, III, aVF, and V3 through V6.  This indicates RETROGRADE conduction through the atria - the impulse starts low and continues in a backward fashion through the atria. This tells us that the rhythm originated in the AV junction or low atria.  The "junction" is usually defined as all of the complex AV node and the Bundle of His.

The literature over the years has been very confusing about the exact location of the "junctional" pacemakers.  One commonly-accepted guideline was that a rhythm is "junctional" if there are retrograde P waves with a short PR interval, or a P wave that occurs within or after the QRS.  A rhythm with a retrograde P wave and a NORMAL PR interval is said to be "low atrial", indicating that the ectopic pacemaker involved was located in the low atrium, producing retrograde conduction through the atria and normal delay through the AV node.

While both of these scenarios are plausible, it probably is not possible to say with certainty where the actual pacemaker is just by looking at the surface ECG.  The AV node has been found to have pacemaking capability in all three of it's regions, and the Bundle of His is also able to produce ectopic impulses.  PR intervals vary greatly, especially in pediatric patients, and can be influenced by heart size and heart rate.  The retrograde conduction through the AV node toward the atria can occur over the fast or slow pathways. The "major" junctional pacemaker is thought to be in the proximal Bundle of His.  Junctional or low atrial ectopic rhythms can occur because they override the rate of the sinus rhythm, following the rule that "The fastest pacemaker controls the heart".  junctional rhythms can also occur as "escape" rhythms, only occurring because the sinus impulse has failed or been vlocked - often due to AV block.

Since the exact location of the ectopic pacemaker in this case cannot be determined without electrophysiology studies, it is important to evaluate the effect, if any, the rhythm is having on the patient. Since there is a P wave before every QRS, and the QRS complexes are narrow, it can be assumed that there will be no clinical effect on this patient.  In addition, the rate is within normal range, and that is also unlikely to produce any clinical effect.

The causes of ectopic rhythms are many, and range from completely benign to serious.  So, this child should be evaluated in light of her symptoms, history, and physical assessment.