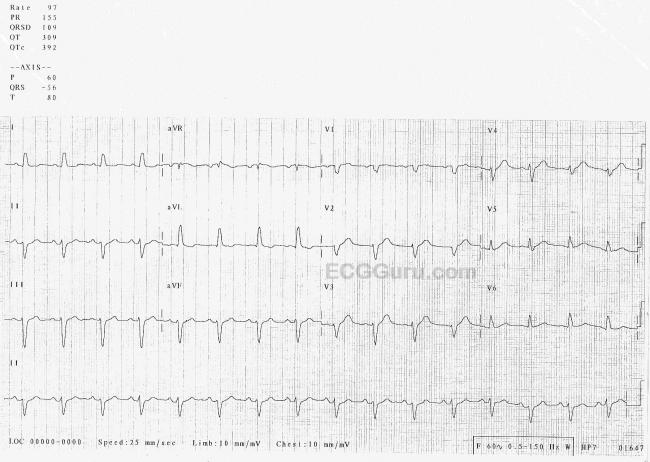 This ECG was taken from a 60 year old man who was complaining of severe substernal chest pain, radiating to his left arm and a non-productive cough.  There was some initial discussion among the EMS crew  about the possibility of the ECG showing a "benign early repolarization" pattern because of the concave upward ("smiling") ST segments.  They also considered a diagnosis of pericarditis, because the ST segments seem widespread.  The baseline artifact makes it difficult to evaluate for PR segment depression or Spodick's Sign.

The patient's age (60 years) and troubling symptoms (chest pain radiating to the left arm) ruled out BEP for the paramedics.  The ST segment elevations are pretty widespread - Leads V3, V4, V5, V6, I and II all show some STE.  There are also "hyperacute" T waves in the leads with STE.  There are ST abnormalities ranging from flattening of the shape to depression, but the bottom line is this patient is a 60-year-old man with substernal chest pain radiating down his left arm!

The patient was treated in the ambulance with chest pain protocols, and was transferred to a hospital with an interventional cath lab.  The patient was conculusively diagnosed with an acute M.I. and underwent angioplasty.

This is a good ECG to demonstrate subtle changes when, combined with patient presentation, can help us diagnose a coronary event.  It helps us emphasize that not all STEMIs will have dome-shaped, "tombstone" ST segments, and that patient symptoms, history, and age are important to consider.

This series shows the evolution of ECG changes in anterior wall M.I. secondary to occlusion of the proximal left anterior descending artery.  The patient is an 88-year-old woman with chest pain.  She was designated a "cardiac alert" from the field by paramedics.  Her proximal LAD was opened and stented in the cath lab.  We do not have follow-up information on her.

The first ECG in the series, titled "12-Lead 3", shows ST elevation at the J point in V1 through V3.  In addition, the T waves are "hyperacute" - tall, broad, and asymmetrical. This can be an early, transient sign of myocardial injury.  Slight reciprocal depressions are seen in the inferior leads.  Lead V4 has a T wave inversion that is out of place with the progression of the T waves in V3 and V5.  Lead placement may be to blame.  Hyperacute T waves in a patient with chest pain should be taken very seriously.

The second ECG, titled "12-Lead 4", shows continued elevation at the J point in Leads V1 through V3, with a lessening of T wave amplitude.  In addition, Lead aVL is showing some T wave changes. The T wave is biphasic, and may be about to become inverted.  This is not an improvement!  V1 through V3 show us the anterior-septal wall, and an M.I. here indicates occlusion in the LAD.  Leads I and aVL show the high lateral area of the anterior wall, and damage here is an indicator that the occlusion is proximal.

The third ECG, titled "12-Lead 5", shows a "maturing" of the ST segment elevation.  Even though there is some significant artifact, we can see that the ST segment in V1 is coved upward, and the ST segment in V2 is flat.  Both shapes are abnormal, and a sign of CAD.  The T waves have become less pronounced, but V2 looks as if the T wave may become inverted in the near future.  V3 looks improved in this image.

The patient's clinical symptoms did not improve during these ECG changes.  Hyperacute T waves are not a definitive sign of STEMI, but they provide a highly visible warning that may catch attention.  They definitely are an indication to run serial ECGs, as these paramedics did.