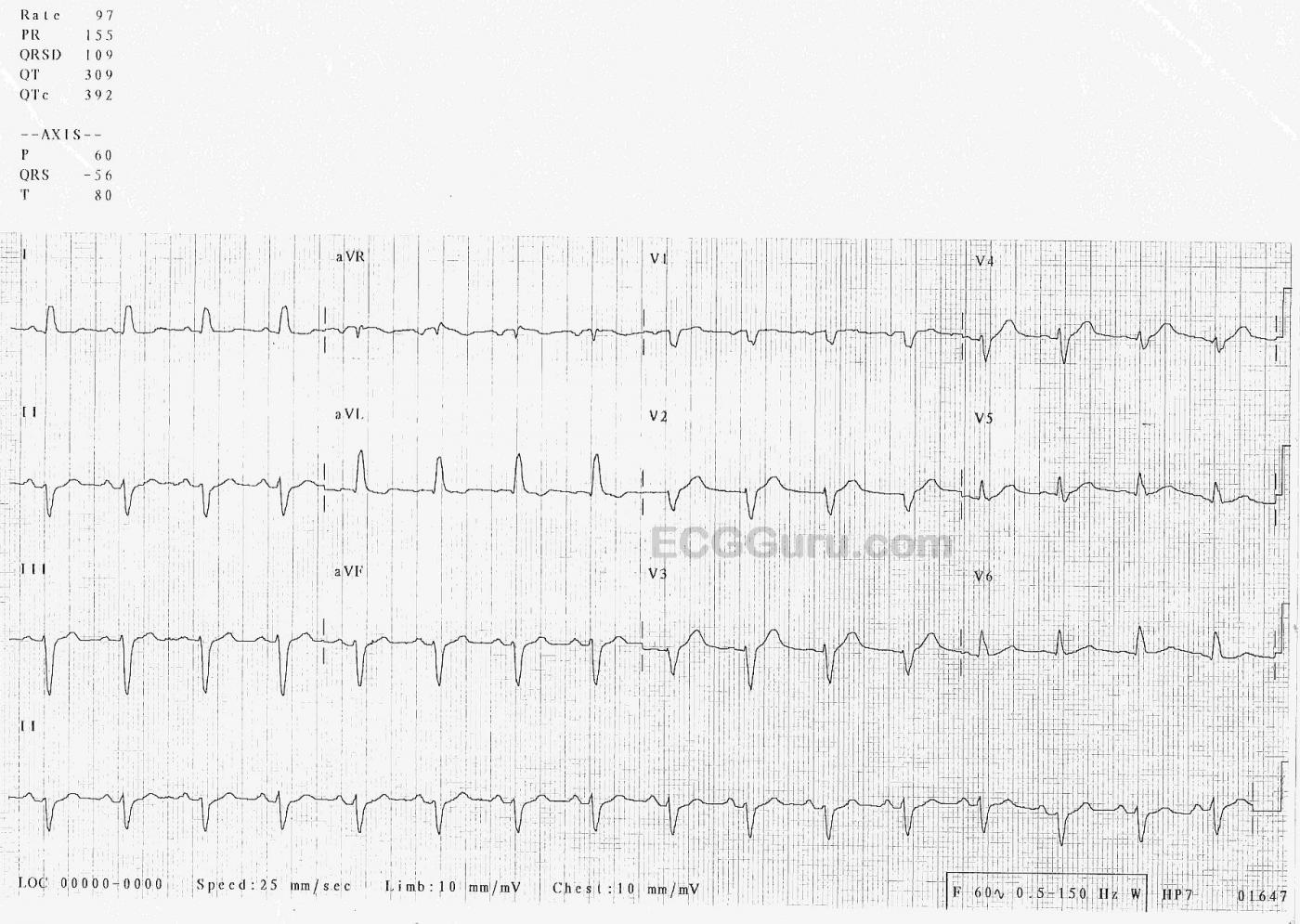 Interpretation:  The fast rate is probably attributable to the patient’s difficulty breathing, as this ECG was obtained in the Emergency Department before treatment had a chance to alleviate his symptoms. The other most noticeable abnormality on this ECG is the axis shift – normally, Lead II is positive.  While there are many reasons for axis shift (myocardial infarction, chamber enlargement, body habitus, etc.), nearly all can be ruled out in this patient.  Instead, he has the ECG signs of left anterior fascicular block, also called left anterior hemiblock.  Think of it as half a left bundle branch block, because the left anterior fascicle is blocked while the posterior fascicle is still conducting.  The effects on the ECG are:

Studies have shown some association of LAFB with other cardiac conditions like CHF and atrial fib. But, as a single ECG finding, it is considered rather benign, possibly signaling fibrosis or other disease beginning to affect the interventricular conduction system.

EDIT: After writing this, Drs Grauer, Jones, and Parrinello were kind enough to weigh in on the significance of the wide QRS and the tall T waves. Please read their comments below for a fuller understanding of this ECG.

Had we more information about the patient, we would not have to speculate. ECGs are best evaluated with full clinical information.

Today's tracing is interesting — but it unfortunately prompts more questions than it answers. The limited history that we do have is important — in that although there is no mention of chest pain — this elderly man presented with an exacerbation of his longstanding heart failure. The Framingham Study taught us that up to 1/3 of all infarctions are without chest pain (ie, "silent" ) — with half of these non-chest pain infarcts presenting with "something else" other than chest pain — of which, shortness of breath was by the far the most common non-chest-pain equivalent symptom. Therefore, even without a history of chest pain — the possibility of associated infarction needs to be considered in any adult presenting with an acute dyspnea-related event.

I found the ECG itself puzzling. As per Dawn — the rhythm is regular at ~95/minute. I also measured the QRS complex as 0.11 second in duration — but the QRS "looks wider" than this. I'll emphasize that although QRS duration is not wide enough to qualify as LBBB (which requires QRS widening of ≥0.12 second) — the QRS complex in this tracing "looks" and is wider-than-it-should-be (ie, more than half a large box in duration = >0.10 second). More than simple LAHB (Left Anterior HemiBlock) — which as per Dawn, as an isolated finding in an elderly patient does not necessarily convey prognostic significance — I'd classify this tracing as showing a nonspecific form of IVCD with LAD (Left Axis Deviation). Simple LAHB may slightly prolong the QRS complex — but it doesn't typically produce the widening we see here, that to me is more suggestive of underlying heart disease.

The problem is — HOW to interpret ST-T wave changes in the face of a nonspecific IVCD? We can't use the "usual critieria" — because nonspecific IVCD may alter the process of depolarization and repolarization in unpredictable fashion. IF the QRS was not wide — I would definitely interpret the T waves in leads V2, V3 and V4 as "fatter-at-their-peak" and "wider-at-their-base" than they should be, given the modest QRS amplitude in these respective leads. And, given the potential history of a new dyspnea-related acute event — I'd be concerned that these changes could represent hyperacute T waves. But since the QRS complex is wide — I am not as comfortable calling these T wave changes hyperacute.

BOTTOM LINE: I do not see clear evidence of an acute event on this ECG — and prompt cardiac catheterization is clearly not indicated. But the tracing is not normal — and in the absence of more clinical information and a prior ECG for comparison — I would definitely keep in mind that the anterior leads may be showing early signs of an ongoing acute event. I'll emphasize that initial treatment remains the same (ie, treat this patient's heart failure exacerbation) — but I'd add that serial troponins plus several repeat ECGs in short order (ie, getting the next ECG within the ensuing ~30 minutes) — as well as efforts to obtain a prior ECG for comparison would be prominent in my approach.

I wish we had more information — because I'd LOVE to know what happened ...

P.S.: For those wanting to know more about the topic of "Silent" MI — Please CLICK HERE to listen to my 3-minute Audio-Pearl #44 on this subject.

Wow, Dr. Grauer. Thank you for really coming in for a closer look and pointing out features I didn't even consider. I also wish we knew the outcome and more about the patient's presentation. This ECG came from a group of ED ECGs with very little additional info from the donor. It reminds me of two things: all ECGs should be evaluated with as much information about the patient as possible and serial ECGs are often essential in diagnosis. So, can we rule OUT LAFB, or consider it as one of the possible diagnoses for this patient?

DAWN — Your question about whether this tracing represents LAHB or not gets into "semantics" — and I would bet that if you asked 10 cardiologists — that you'd receive a bunch of different answers. Further — I submit that the answer to your question does not matter clinically, since it doesn't change management as to whether we call the conduction defect "nonspecific IVCD" — or "LAHB" — or IVCD with left axis — or IVCD with LAHB. My preference is the latter = "IVCD with left axis".

Similar semantics are seen with the terminology for complete LBBB — which sometimes manifests left axis deviation and sometimes doesn't ... perhaps depending on where the anatomic defect in the left bundle branch conduction systems occurs — or perhaps on whether there is more relative conduction block in parts of the anterior or posterior fascicular system. None of that much matters clinically — as it is all "LBBB".

The interesting part of this tracing to me are those T waves — which might (or might not) represent a hyperacute finding. I have NO idea if they do — but BEST to be prudent and consider the possibility as I describe. KEY POINT: — At least 1/3 of all acute MIs would be missed if we get "stuck" on waiting for "stemi criteria" to be fulfilled — so I raise the possibility that anterior T waves in this example could indicate "OMI" ( = Occlusion-based MI) in progress — and that MORE information is needed.

For more on OMI — Please check out my ECG Blog #193 (including the Audio Pearl and Figure-3 in the Addendum).

I agree too with prof.Grauer that it is not simple LAFB mainly because the QRS is wider than expected in LAFB. I agrre also with the statement that if we ask Cardiologists (I'm cardiologist...) then we have different answers on the defitnition of the present conduction disturbance.

But semantic is really not very important when we manage a crashing patient: be it LAFB or LBBB or something else what is really important is to treat the patient and not ECG (as a wise statement tells...). In this regard, I too, as already mentioned by prof.Grauer, would have been concerned by the tall (compared to small QRS) T waves in chest leads with wider than expected area under T waves...ongoing anterior infarction?

Thank you Drs Grauer and Parrinello

I clearly see what you both describe, and absolutely agree that we often get stuck on terms. I am very much in favor of treating the patient and not the ECG, and I very much wish we knew more about this patient. This leaves me with the dilemma of my original title not being at all helpful for someone searching, while your comments are very helpful. I want to go on record as originally calling this post, "Left Anterior Fascicular Block", but revising it to allow searchers to more accurately identify the ECG. Thank you both so much for the thoroughness of your comments, very helpful.

A Frequent Finding In LBBB and IVCDs

This is a pattern that I frequently see with LBBB, but not so much with IVCD (truthfully, I don't recall EVER seeing it with an IVCD).

You CAN see it with classic LBBB when the impulse crosses the septum from right-to-left and then immediately enters the posterior fascicle. Activation of the posterior fascicle first will give the illusion of an LAFB when there is actually no block or delay in the anterior fascicle. You can also see this with right ventricular pacing in which the pacing wire is in the apex of the RV (but there is - again - a wide and somewhat bizarre QRS).

There is no LBBB here (although the =/> 120 msec criterion is rather arbitrary) and there is no prolongation suggesting concurrent slowing of conduction in both bundle branches. I think it's simply a matter of a slight delay in the conduction velocity in the anterior fascicle, giving the posterior fascicle a "head-start." A true LAFB adds about 20 msec (max!) to the QRS duration. This could be a case of a "pseudo-LAFB."

Thanks for your comments on this ECG. I originally thought it was LAFB with a wider-than-normal QRS. Your comments and those of the other Drs above, remind me to slow down and take more time. I really wish I had more patient information - it would have been an even more lively discussion. That being said, I have learned a great deal from the three of you, and I hope my site visitors do too.