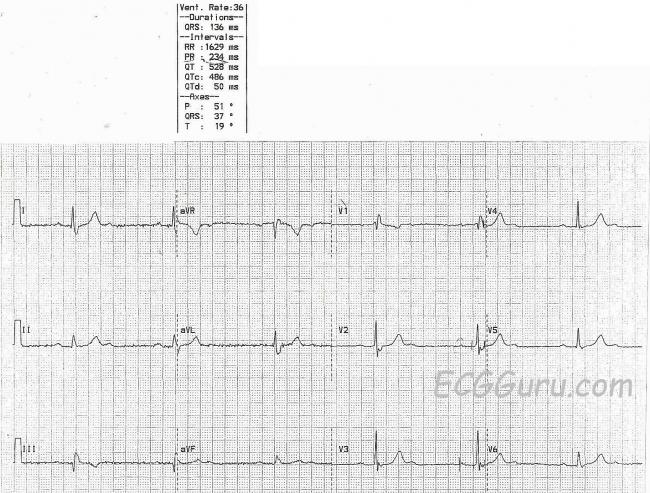 This interesting ECG is a great one for your more advanced students who are ready to discuss the anatomical and physiological differences between the AV blocks, as opposed to just measuring PR intervals.  It shows a sinus rhythm with an atrial rate of 72/minute.  Second-degree AV block causes every other p wave to be blocked, resulting in a pulse rate of 36 beats per minute.  In addition, the ECG shows right bundle branch block, as evidenced by the wide QRS (136 ms), rsR' pattern in V1, and the wide little S wave in Lead I.

When second-degree AVB conducts 2:1, it can sometimes be difficult to determine if the block is Type I (occuring above the Bundle of His), or Type II (occuring at or below the Bundle of His).  This is because two p waves must be conducted in a row to see the tell-tale progressive prolongation of the PR interval seen in Type I (Wenkebach).

Two clues that this block is Type II are:  1) the presence of right bundle branch block.  Type II blocks are sub-Hisian blocks, often in the fascicles, and the right bundle branch block is a fascicle block.  Many Type II AV blocks show signs of right bundle branch block;   2) The non-conducted p waves occur well clear of the refractory periods of the preceding beats.  In Type I blocks, the QRS is eventually dropped because the p wave occurs in the refractory beat of the preceding QRS. Only one beat is missed.  In Type II blocks, p waves that SHOULD have conducted, don't.  Sometimes, more than one p wave in a row will be non-conducted.

Clinically, we would need to be concerned about the location of the block, because supra-Hisian blocks can be transient or even benign, and sub-Hisian blocks are often permanent or progressive.  But the most immediate concern, of course, is that the patient's heart rate has been halved, resulting in a bradycardia which is almost certainly symptomatic.  Also, we would want to evaluate the patient for coronary artery disease and M.I., as that could be the cause of the AV block. This patient has some minor flattening of the ST segments in Lead III, but the T wave inversion can be explained by the RBBB.  Unfortunately, we do not have clinical information on this patient.

Just a few brief comments on this tracing Dawn posted. FIRST — It is not at all easy to make out atrial activity. That said — I believe atrial activity IS regular (See RED arrows at THIS LINK).
BOTTOM LINE: I do not think we really know for sure what type of 2nd-Degree AV block this tracing represents. It could be either Mobitz I or Mobitz II. That said — given the low rate ~ 40/minute — Pacing may be needed in any case ...